Within walking distance of Harmony Studios, you will find many attractions! The great dowry of Loutra Edipsos is their thermal springs. Today there are more than 80 thermal springs, whose temperature varies from 28 ° C to 86 ° C. In addition to private hydrotherapy facilities operating inside or outside hotels in the form of regular baths or swimming pools, the LOTropolis is the hydro-treatment center of EOT. Which provides all the possibilities for balneotherapy with modern techniques. We must emphasize that this big band is one of the largest and best of its kind in our country. In addition to regular baths, it also has special therapy baths, edge baths, and Scottish showers. The open pool meets the needs of hydrotherapy at low cost. The physiotherapy room with exercise and electrotherapy aids in the immediate and responsive response of the body to bathing.

The Municipal Beach meets the needs of all who want to combine balneotherapy with beneficial sea water.

Finally, overlooking the beach of Edipsos, you can enjoy your coffee or your food in the many cafes and taverns that are available.

Therma Sylla Hotel was built in 1896. It is the most impressive building – hotel of the period and the first to be found in Loutra Edipsou. In its basement there are facilities for balneotherapy.

The building is three-storey with basement and attic. The composition takes advantage of the angular position of the plot by creating a tower in the corner that dominates the shape and dynamically projecting the building. Symmetrical openings are another element of building the building. Inside a central entrance hall with a central corridor per wing and rooms on both sides is created.

Between 1910 and 1912 his first major renovation was made. Recently (1995) the Ministry of the Interior approved a study of its renovation and conversion into hotel category A and the creation of a hydrotherapy center. (Designer D. Stasinopoulos, Architect).

The Holy Monastery of Ag. Irene Chrysovalantou, is a relatively new female monastery built on a verdant beautiful hillside.5 km from the Sun there is a junction with a road that leads after 2 km to the monastery. Apart from the church of Peace of Irene, there are two chapels of the monk Onoufrius, whose memory is celebrated on June 12, and in the temple of Agios Ioannis Polyklos, who celebrates on June 12th.

Monastery of Saint George the Great 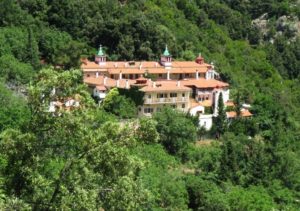 The year of the foundation of the Holy Monastery of Saint George the Great, in the Sun of Edipsos, was officially mentioned in 1670, but according to the local tradition the monastery and the presence of monks in the specific region of Northern Evia have existed since the 13th century.

The monastery experienced great growth during the first centuries of its life. Following the peculiar system, about 300 monks practiced around it, living in huts and “kalogerospita”, according to the local tradition, which were operating on Sundays and celebrations in the Byzantine Katholikon of Agios Georgios, cruciform, with ornate temple Of the middle of the 17th century, full of scenes and scenes from the Bible and famous icons of the 16th and 17th centuries.

During the Ottoman rule, the monastery offered great service to the enslaved Geno and was destroyed three times. A historical chronicle of the monastery, written in October 1727 by the Abbess Anania Hieromonach, refers to a 100-man scream of this Eubotian region by the Turks and the monastery’s non-operation for 20 days. The monks and trained fathers were transferred to the Chalkis by the Turks to kill them. However, the great martyr George, with the power of God, freed them.

The monastery was also a place of refuge and protection for many Christians and even scientists in the difficult times of Occupation. It is particularly loved by the inhabitants of the wider region of Northern Evia.

For centuries it was male, but in 1970 it turned into a female. Today’s brotherhood (with about 10 nuns) and with the unwavering support of many pilgrims, renovated the monastery’s buildings. In recent years, the rebuilding of a new large temple of Agia Nina, Georgia’s Georgian Fountain, began. The late Igoumeni Pelagia, who slept in 2013, succeeded the new Abbot Chrysostomi.

Enjoy with your children or your own knowledge and natural beauty. Spend an unforgettable day.

What do shells have to do with architectonic? How did we go from Doric to Ionic? Has the man made discoveries or copied nature? How did people communicate before? How did life begin on the planet? How was the planetary stance created? What do you know about fossils? What do you think was the first dropper? How is pearl cultivated? Many questions of man made simple answers to the Nautilus Museum. All this and many more you will meet and see in the middle of a show for young and old. For those who have shopping, in the Museum’s shop there are many choices of quality gifts at very good prices.

The village of Drymona is known for the beautiful waterfall of the Siapas River. The rushing waters form two smaller and two large lakes. The surrounding area is touristy. Trails, stairs, as well as benches for rest and playgrounds have been built.

Yialtron Beach, also known as Loutra Gialtra, is a picturesque beach with cafes and taverns where you can enjoy your coffee or your food overlooking Edipsos. A small beach, to the left of the harbor and sand, both on the coast and on the beach.

In the Miocene period (6,500,000 -9,000,000 years ago), the development of the environment of the fauna, the petrified traces of which are kept today in the small beautiful Museum of Palaeontological Findings of Kerasia.

The presence of fossil mammals in Kerassia has been known since the 1960s-1970s. In 1992 a test excavation was carried out in Kerasia, funded by the Research Committee of the University of Athens. In 2006 the Prefecture of Evia funded the University of Athens for a short excavation in the framework of the existing palaeontological exhibition. To date, 24 different species of animals have come to light from Mr. G. Theodorou’s team. Heavy, feline (mainly cutlery), tandoidal horses, pigs, rhinoceros (with and without horns), hawthorns, eladiates (gallanths of giraffes) and others. In the Museum are presented the compositions of Elladothyria and Samothira as well as independent skeletal elements.

The monastery of Saint David, which is situated in the heart of a densely populated area at the bottom of the mountains “Kavalaris” and “Dryon”, opposite the village of Drymonas and above the village of Kalamoudi, is dedicated to the Transfiguration of the Savior.
In the temple of the Monastery, the miraculous and miraculous bones of Saint David of the Elder, the censer and the stone of Saint (of Russian origin) and other precious heirlooms are kept in an art relic.
Also, around and outside the monastery you can visit many churches in memory of various saints. Do not miss to visit the Oasis of David, walking a short walk to the cave where the miraculous Osios practiced.
It is worth the passage from the underground chapel of Agioi Anargyroi to the SE wing of the monastery, where you can admire hagiographies of the 17th century.
Indeed, this chapel during the Ottoman domination is said to have been a “hidden school”.
The holy monastery of Saint David is well-known for the divine virtues of a charismatic elderly monk of the late Iakovos, who for many years and until the end of his life was his abbot.
As for the year of the first building of the Monastery, it existed in 1500, as Saint David (lived around 1550) created the Monastery on the ruins of a pre-existing temple.
It celebrates on August 6 (Transfiguration of the Savior) where a very large bargain on the outside of the monastery takes place – and on November 1 in memory of Saint.

Many Christians from all over Greece visit the Monastery to worship the Holy Relics of many Saints and, of course, the founder of Saint David’s Elder.

In the village of Agia Anna there is a Folk Museum in 1981 with traditional costumes, jewelery, woven, agricultural, domestic and other tools and objects used in their everyday life by the residents. Recently the museum moved to a better and more comfortable space and was enriched with more exhibits.

At the Folklore Museum of Agia Anna, the visitor can admire, among other things, the unique Agianniotiko Foresia, which was worn until a few years ago in the surrounding area, and will learn about the habits, the way of life of the inhabitants and the historical route From the years of Ottoman rule to our days.

In Greek folklore, traditional Ayannian costume has its own exclusive page. Today, samples of male, female and children’s costume from Agia Anna are exhibited at the Folklore Museum of Agia Anna.

Men’s attire had as its main characteristic the classic Greek fustanella with a vest, but especially with regard to embroidery. The seagull was the basic ladies’ garment with embroidered shirts and aprons. Children aged 3-12 wore colorful “hair” woven on local looms, skirts of wool colored and knitted cuffs, embroidered with various stitch patterns.